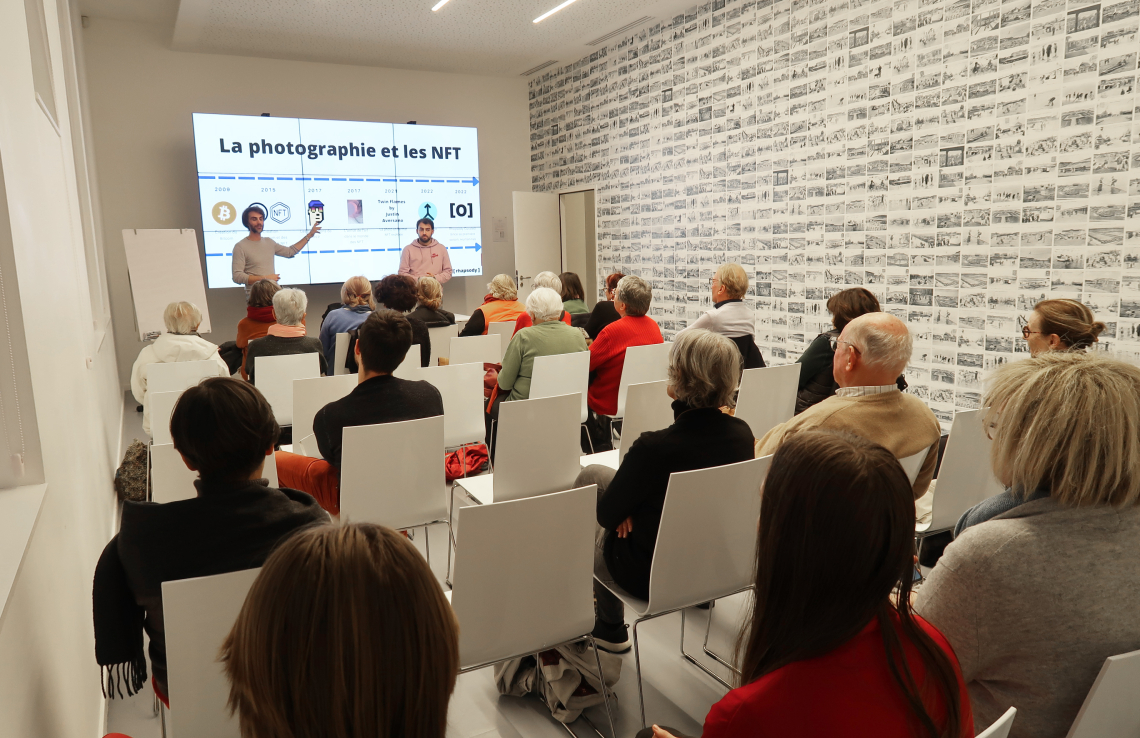 Are you a Friendciscaines subscriber? Every Tuesday, the Franciscaines' team organizes a series of meetings to discuss the collections, the programming, and to discover the facilities or the backstage...

Free for subscribers with their Pass

Reservations can be made online or at the Franciscan's reception desk.

Juliette Gerfault, in charge of Les Franciscaines permanent collections, will present the new acquisitions made by the City of Deauville in 2020 and 2021. Between donation and purchase at public auction, the Franciscan's acquisition policy is explained in the heart of the Franciscan's new tour.

Let's put our easel in front of the window

On the occasion of the 150th anniversary of Impression, Sunrise, which Claude Monet painted from his hotel room, Catherine David, Cultural Mediator at Les Franciscaines, invites you to look out of the window at the view offered by the landscapes that amazed the artists: The garden of Amfreville at the red castle by Edouard Vuillard, The government square in Algiers as well as the views of New York by André Hambourg and The yacht basin in Deauville by Pierre Bonnard.

Happiness in contact with nature in 19th century bourgeois painting

In the 19th century, in the midst of the industrial revolution, a feeling of loss of authenticity emerges. People fled the cities and the crowds to escape into an ideal nature populated by phantasmagorical beings: peasants, brigands, gamekeepers and picturesque canoers. They invade the bourgeois salons to move us, to make us travel, or to reinforce the dominant ideology. Emmanuel Causse, cultural mediator, invites you to discover little-known works that are not completely foreign to our time.

The Forgotten of History

A meeting and signing session with the authors Dorothée Lépine and Patricia Chaira, to discover who were the great female figures of History living in the shadow of great men. Sometimes because the time did not allow them to be known, sometimes because men have "hidden" their existence or their intellectual and creative power, sometimes women have "sacrificed" themselves, for the benefit of the career of the man they loved.

Books that make us feel good. A selection of wellness readings

On the occasion of spring, Gwenaëlle Lancelot, invites you to discover these books that make you feel good. To understand that each book has a rendezvous with its reader, the Director of the media library will propose texts that make us free, those that make us strong, those that make us sparkle. Through universal or lesser-known authors, everyone will rediscover the power of books thanks to the unique bond that is created between readers and books. Literature will make you laugh, love, travel. From literary remedies to appeasement, the books presented will make you feel like a prodigious medicine. Set off on an invigorating and invigorating journey.

Behind the scenes of the "You are a Tree!" exhibit set-up.

Emma Crayssac, Franciscaines Temporary Exhibitions Production Manager, offers an atypical tour of the "You are a Tree!" to discover the steps involved in creating an exhibition and its implementation.

The little-known disciplines of the horse world

Have you ever heard of Horseball? Or Ski Joëring? Lola Petin, in charge of specialized collections, and Lucie Le Maistre, in charge of collections, will take you on a discovery of little-known disciplines in the equestrian world, where the horse is more than just a mount, it becomes a real partner in the game.

Presentation of the Books and Music Festival

Jeanne Dewald, in charge of production for the Franciscan literary events, presents the program of the 19th edition of the Deauville Book & Music Festival. During 3 days, from May 6 to 8, 2022, novelists, biographers, illustrators and comic book authors, children's authors, singer-songwriters and also musicians, will meet in Deauville for drawing concerts, readings and singular encounters, commenting on their relationship to music and literature.

Jean Du Chatenet, Director of the Fernand Léger Farm-Museum in Lisores, welcomes you with Philippe Normand, Cultural Director of the Franciscaines, to Fernand Léger's farmhouse, which has been rehabilitated as a museum dedicated to the painter and his companion Nadia Léger. In this former studio of the couple, exceptional works are waiting to be discovered when you push the door.

First part: the development of Art Nouveau in Europe

Agathe Bigand-Marion, Head of Cultural Mediation at the Franciscan Sisters, presents, in two lectures, this emblematic movement of the second half of the 19th century and the beginning of the 20th century. Because it tends to abolish the borders between the artistic fields and becomes for many the ground of debates of ideas, utopias and humanistic values, the Art nouveau will be the key to develop the spirit and the human sensitivity through art, nature and science.

Light in art at the Digital Museum

Whether in painting, architecture or photography, light is the absolute quest of artists. The chiaroscuro, the colored touches or the art of the stained glass, the painters use various techniques to represent it. At the heart of the industrial innovations of the 19th century, it continues to obsess architects. It can be found in all forms of art! An enlightenment brought by Apolline Delarue, cultural mediator.

Of glass and light: The nine stained glass windows of the Franciscans

Amandine Steck, Master glassmaker and restorer of old stained glass windows, proposes a visit of her workshop L'Amande & L'Obsidienne located in Honfleur. A thorough presentation of the techniques of restoration on stained glass will be accompanied by a demonstration allowing to approach the material to better understand it! Reservation required (limited places). A bus will leave from the Franciscaines: departure at 4:30 pm - return at 6:30 pm

Writers of Normandy from the 19th century to today

With Lucie Le Maistre, Head of Collections, and Lola Petin, Head of Specialized Collections, discover regional writers through the Norman collection of the Franciscans. This selection shows the interest that writers have in Normandy in their lives and in their works. From Alexis de Tocqueville to contemporary authors, Norman literature since the 19th century will no longer hold any secrets for you.

Réjane, Comedian of the Belle Epoque

Philippe Normand, Cultural Director of the Franciscan Sisters, presents Réjane (1856-1920), who was, along with Sarah Bernhardt, the most famous actress of her time. A recent donation to the Franciscaines by Anne-Marie Perier-Sardou, her great-granddaughter, restores the formidable career of the one who created Madame Sans-Gêne and Hedda Gabler by Ibsen. Photographs by Paul Nadar, caricatures by Gus Boffa, fetish objects, letters and correspondence, ... so many moving milestones that are now revealed to all after their transmission over four generations.

Deauville and song: a beautiful story

From Maurice Chevalier to Vanessa Paradis, a number of singers have performed on the beach tours, at the Deauville song contests, or at festivals, and then adopted Deauville. At the same time, songs have been written or inspired by Deauville, while the beach and the architecture of Deauville have been the setting for music videos and television shows, for : Julien Clerc, Anna Karina, Claude François... Explore with Philippe Normand, Cultural Director of the Franciscaines, the collections of the Franciscaines that keep the testimony in images of this beautiful novel and this beautiful history.

Second part: the golden age of Art Nouveau and its influences in the world

Agathe Bigand-Marion, in charge of Cultural Mediation at the Franciscan Sisters, presents, during two conferences, this emblematic trend of the second half of the 19th century and the beginning of the 20th century. Attached to economic and technical developments, Art Nouveau was more easily exported beyond the borders thanks to the development of the railroad and the press. Qualified by its leaders as an artistic renaissance for the entry into the "long-awaited" 20th century, it became an aesthetic and symbolic asset for many capitals and large cities.

The European Royal Residences Collection of the Digital Museum

Witnesses of the history and identity of Europe, the European royal residences are prestigious, complex, multi-faceted places: originally places of power and representation, they are now museums, open to all audiences offering an extremely varied cultural offer. Apolline Delarue, Cultural Mediator of the Franciscans, presents the most prestigious castles and royal palaces of Europe. From Russia to Italy through Germany, from Louis XIV to Sissi, from the kings of Spain to the Russian tsars, a virtual journey through the architecture, art collections and furniture of these residences.